The other day the little man and I made some delicious homemade tortillas! 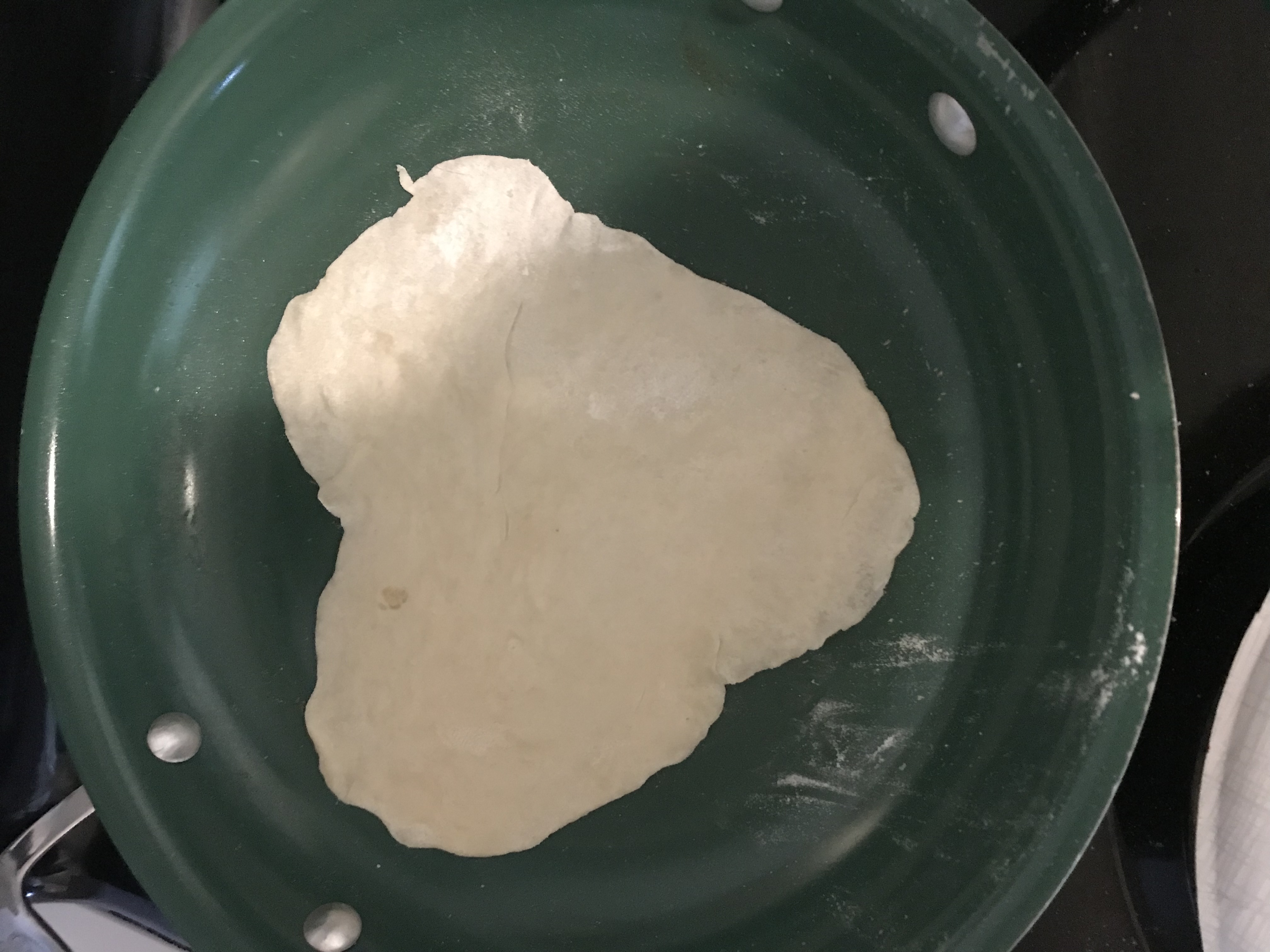 We eat a hell of a lot of tortillas in our house even though we aren’t Hispanic! They are an awesome way to eat combinations of food and it’s light and delicious. That makes it easy to consume and keep buying, plus the wheat content isn’t that high so it’s also not too heavy when you’re using them.

One of the things we’ve been meaning to do though, is make our own tortillas. My wife and I have been saying it for years and I was just killing some time the other day when I found a recipe that I’ll try to find outside of the app I was using. When I’ve tried to share videos from it in the past with friends that I found hilarious they can’t see it because it asks them to download the app. Not that great if you ask me! 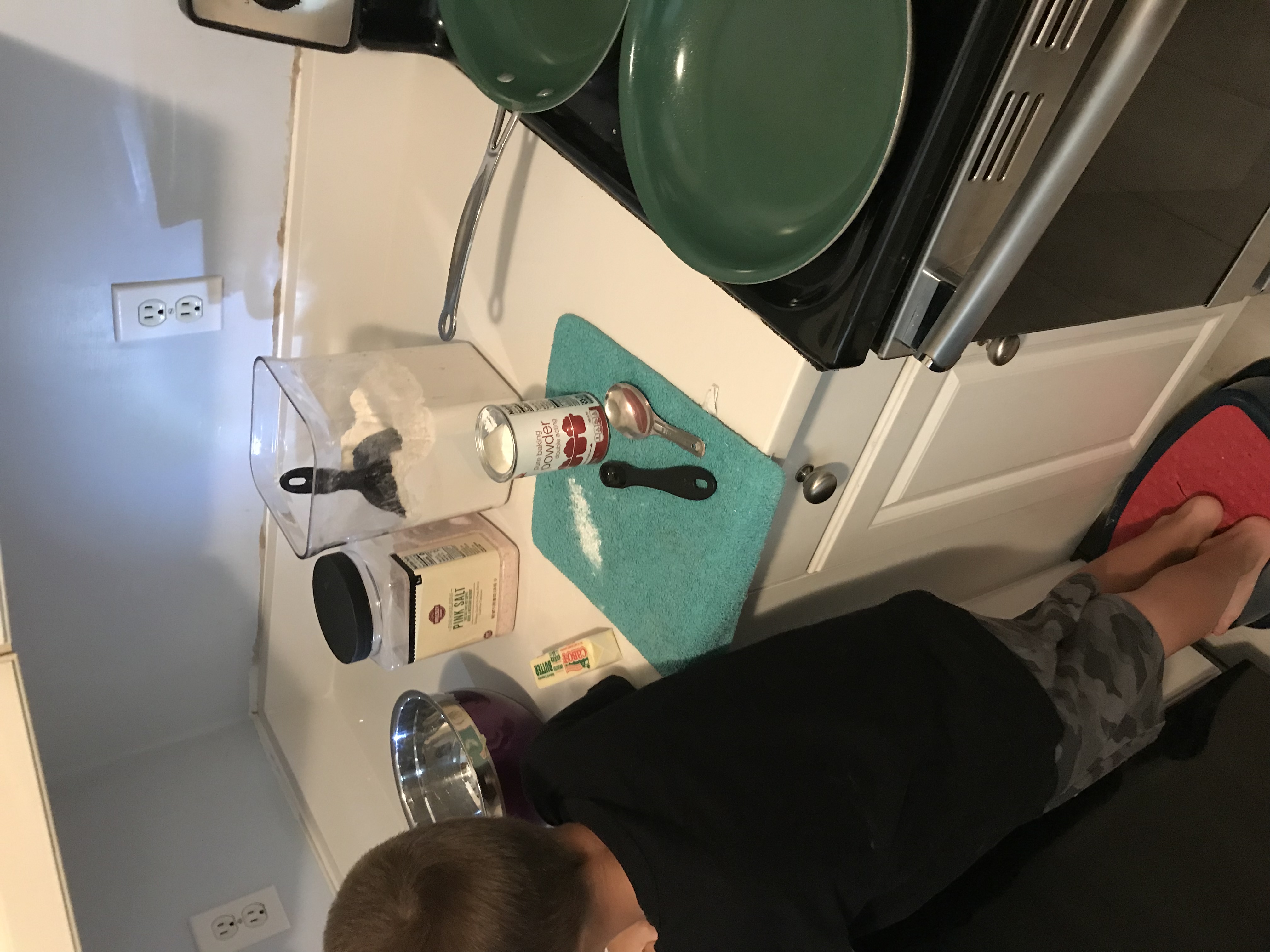 Like most recipes you combine the dry ingredients first and mix it around so that it’s spread out. The little man was good at helping me with most of this project until he started to get really hungry then he couldn’t be bothered lol. We now had to melt the butter so that it’s completely combined and ready to mix into the dry ingredients. 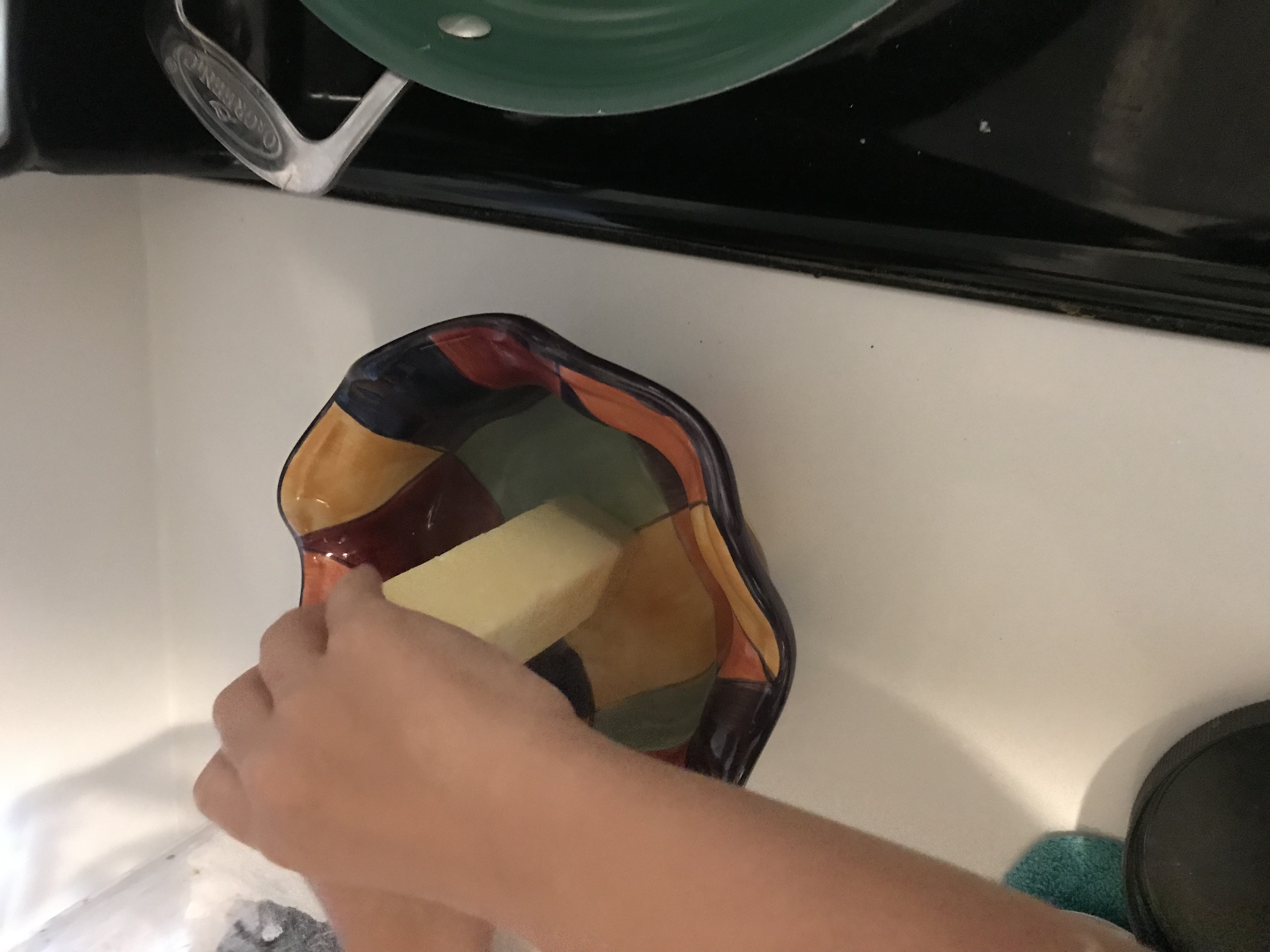 Alright now that the butter is melted we are adding it to the mix and going to mix it around with a fork at first since the water was pretty damn hot! Once it cooled down it was easier to use our hands to mix it but we had to knead it into a dough ball like this. The little man had a lot of fun kneading the dough, he doesn’t usually get to get his hands into raw food like that but since there’s no egg and stuff I felt like it’s a good thing for him to try. He was surprised at how it felt and laughed a bit.

What we also had to do at this step was to let the dough rest a bit. Once you knead it and get it into a nice ball you stick it back in the bowl and cover it with plastic for 10 minutes. That was a bit of a long 10 minutes for the little man when he was helping me but we spent time cleaning the counter while we waited since I knew we were going to roll out some of the stuff on the counter. 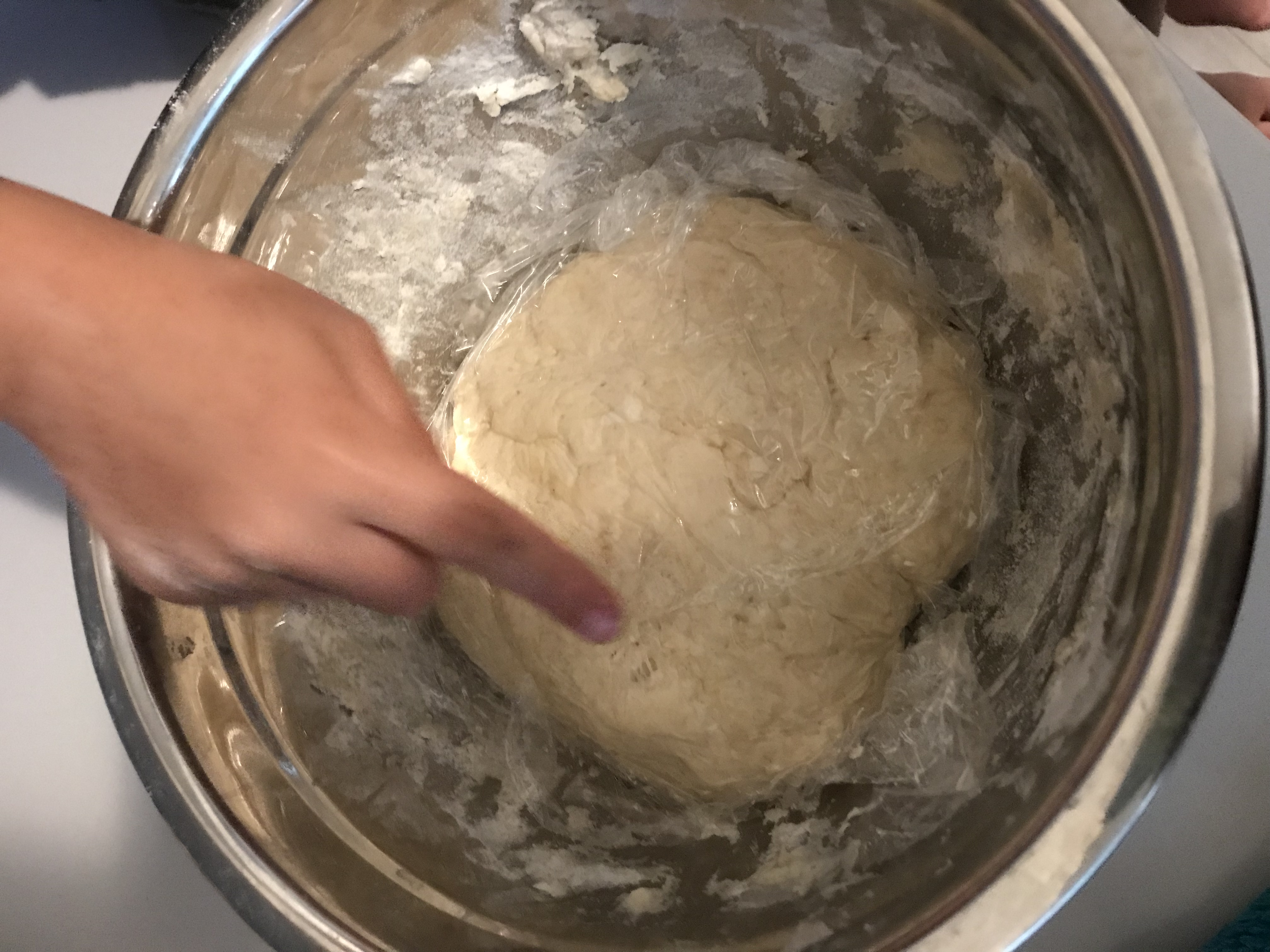 Now that the dough rested for a bit we then pinched balls off the main portion and rolled them. It was pretty funny and interesting that as an adult we take for granted things like this, rolling a ball of dough in our hands. The little man was trying to figure out how to do it! I showed him and he did a decent job, ended up with his own versions of it which was great. While we were waiting for the stuff to ripen, we got the counter ready to go by dropping some flour on it so that the stuff wouldn't stick to it. 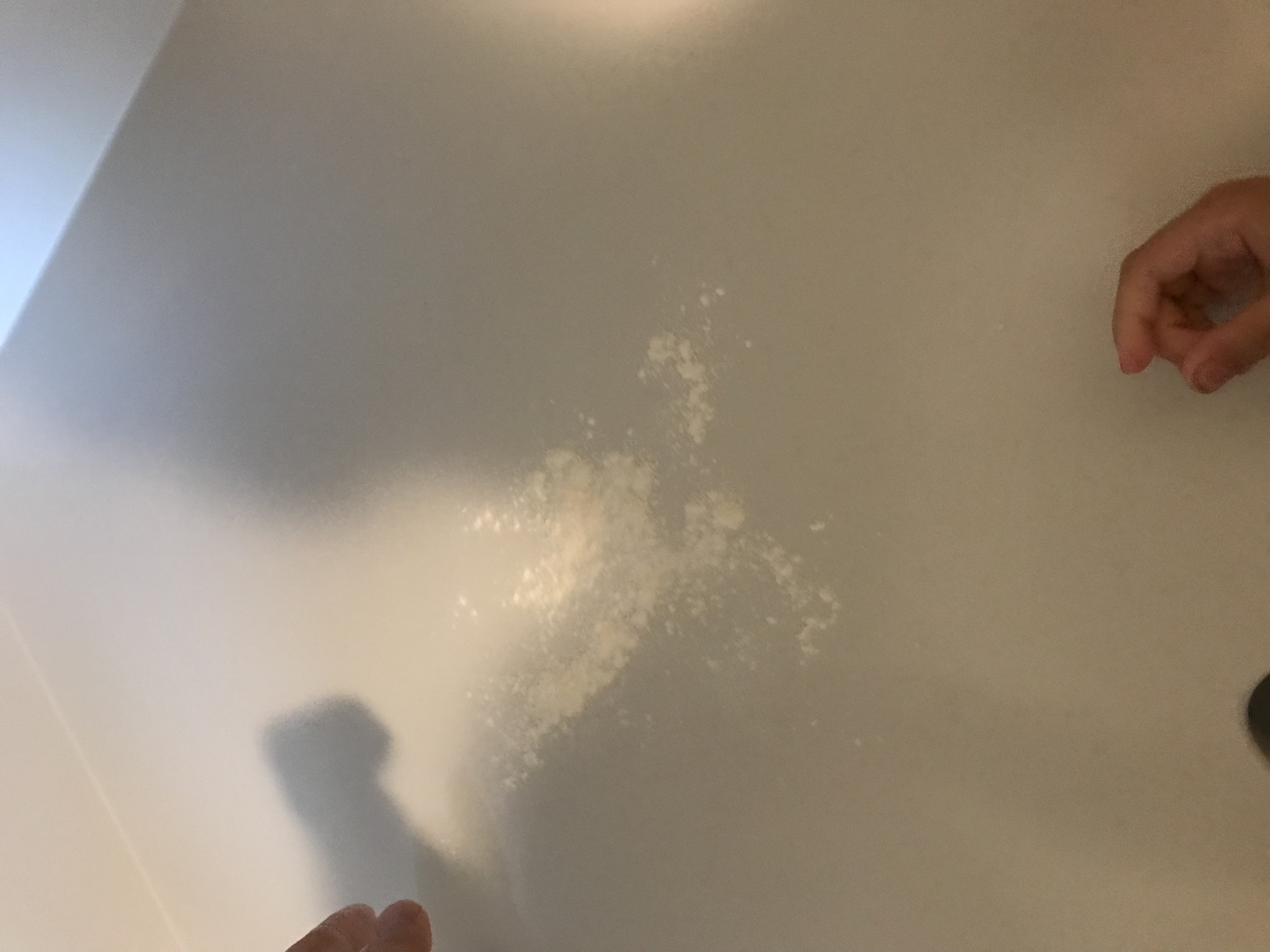 The little man loves any chance he gets to use a rolling pin that he can! This was no different for sure. He did a good job of rolling the dough out so that we could get it to the right thickness to pop onto the warm pan. He did a pretty darn good job rolling them out! I only got about 8 of them out of him before I think his arms got tired from doing it lol it was still good though. 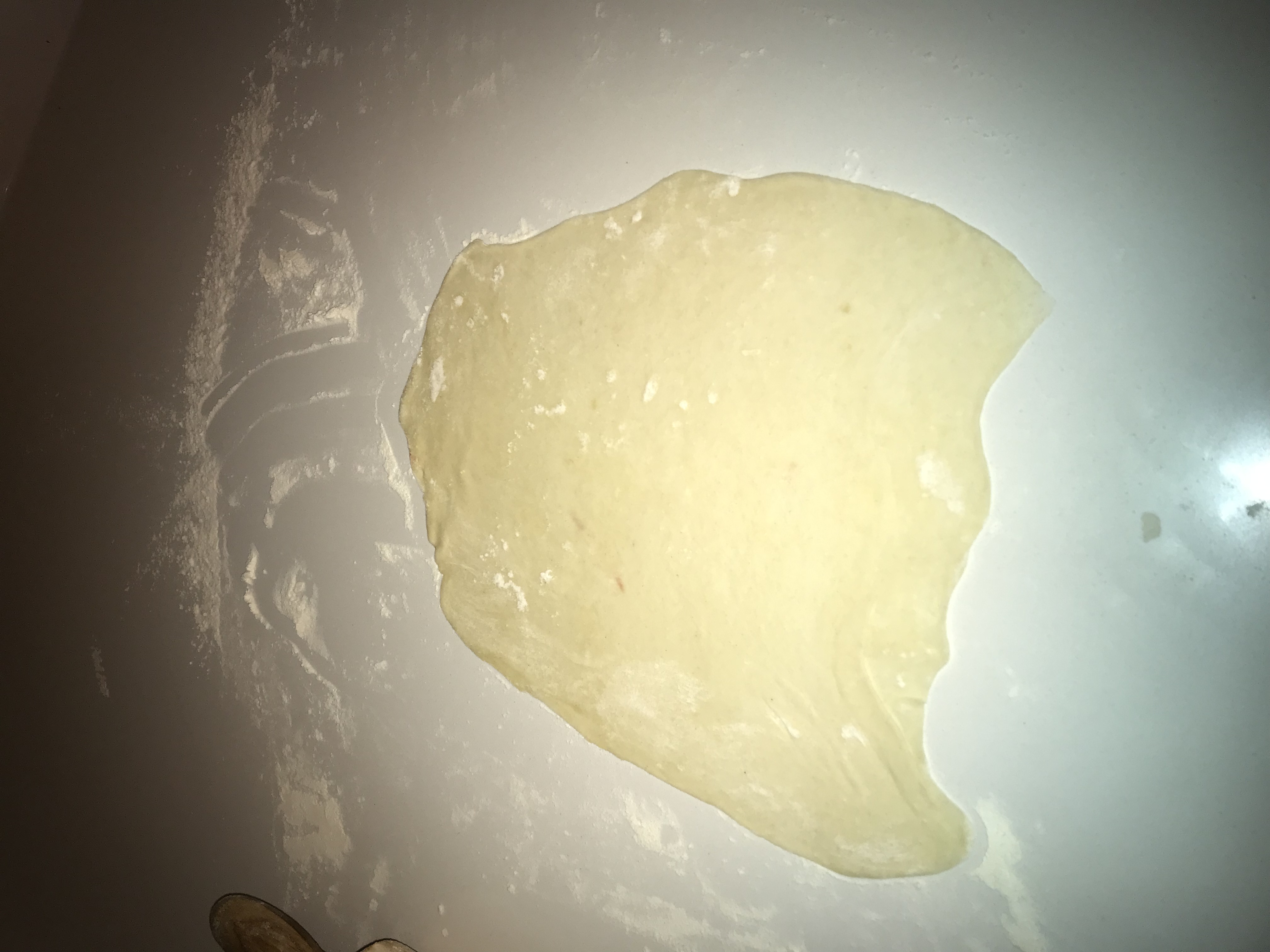 This one he made all by himself, doesn't it look like a great heart?! I thought it was definitely a great random shape that he didn't mean to come up with. I asked him what it looked like and he saw the heart too so that was good. It was great to make our own tortillas, we had a lot of fun. It was a little tricky at some points, he's still getting used to things in his ever changing little body, before they change again lol. We are both learning how to deal with it all! The least we can do is spend time making delicious food together and the other stuff we've been doing.

What has been your homemade from scratch food you recently made? I'd love to hear about it!

I make tortillas too! My kids love them, I don't use lard or butter, I use vegetable shortening.

His tortillas look better than the first ones I ever made (when I was in my 20's) - but I get made fun of for how long it takes me to "get" recipes.

Just an FYI, this is the same way to make bunuelos, just instead of heating the tortillas, you fry them and then top them with cinnamon and sugar.

Ah shortening I'm sure it tastes great lol. I don't like the ingredients of it so we use butter for anything that calls for it. Shortening makes things wonderful but butter does a decent job as well lol.

That’s a good tip for bunuelos I don’t know if I’m familiar with them but I wouldn’t mind trying them! Kind of sounds like American fried dough.

I was surprised how easy the recipe was and the tortillas came out delicious! I’ve eaten them every day with my salad it’s been awesome. I bought more butter to make them again, want to use up the flour before the fall so we can get more in anticipation of fall cooking!

That's the closest recipe I found to what I was talking about.

Shortening... my cousin uses bacon lard with tiny little specks of bacon bits in it. Those fresh off the comal with some slathered on top....

Thank you for your post. I love it when I read something that takes me through a story and makes my mind wander :)

That is awesome and I like the little help in the kitchen 😀
I used to make tortilla but now I don't eat bread or anything that is made with flour, so no tortilla 🙁

Ah yeah we don't eat a lot of bread products in the house but we know that we do have to give them up at some point. The little man needs different things to eat so we haven't pulled the trigger on it yet but we felt the best when we didn't eat any wheat products lol.